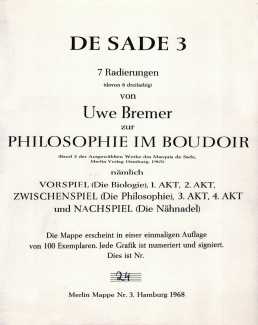 Though initially considered a work of pornography, La philosophie dans le boudoir (Philosophy in the Bedroom) has come to be considered as much a socio-political work as a sexual one. The characters make the argument that the only moral system that reinforces the political revolution is libertinism, and that if people fail to adopt a libertine philosophy then democracy is doomed to failure. Eugénie is a fifteen-year-old girl who at the beginning of the drama is a virgin, naïve about all things sexual, who has been brought up by her provincial, self-righteous mother, Madame de Mistival, to be well-mannered, modest, decent and obedient. Madame de Saint-Ange is a libertine young woman, the owner of the house and bedroom in which the dialogue is set. She invites Eugénie for a two-day course on becoming a libertine. Dolmancé is an older man, atheist and bisexual (though with a strong preference for men), and good friend of Madame de Saint-Ange’s younger brother, Le Chevalier de Mirval. Together Dolmancé and de Mirval take on Eugénie’s ‘education’. Augustin, Madame de Saint-Ange’s young gardener, is summoned to assist in advanced sexual activities.

Uwe Bremer’s seven etchings are designed to capture the general theme of the text rather than illustrating the events of the narrative, and he chose to follow the dramatic format of the original by titling his plates Prologue, Interval, Epilogue, and four Acts. All but the Interval (Zwischenspiel) are in three colours, the black emphasising the biological sexuality of the subject matter while the colour suggests its grotesque context. Bremer’s Philosophie im Boudoir is a typically original, powerful and thought-provoking response to a classic work of transgressive literature.