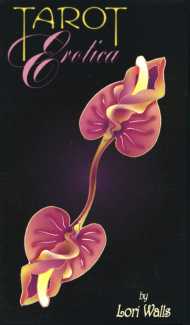 We do no know what was happening in Lori Walls’ personal life during the period when she painted these 78 detailed miniatures, but much work and thought clearly went into them. Not to mention imagination. The cards are clearly themed, with two of the standard four suits, Wands and Pentacles, being replaced by Rods and Stars, making for a subtly more sexualised landscape. Each suit is colour-identified, with Rods (earth, golden-brown, masculine power), Cups (water, blue-green, feminine power), Swords (fire, red, conflict and passion), and Stars (air, purple-blue, resolution and intelligence). The 22 cards of the major arcana are equally inspired, from the open-air animal frolics of The Fool to the wonderful stylised bodies of The Star, The Moon and The Sun.

The designs owe a clear debt to those of Pamela Colman Smith (1878–1951), the British artist, illustrator, writer, publisher and occultist, best known for illustrating the Rider-Waite tarot deck for Arthur Edward Waite. Walls, however, adds a very late twentieth century, overtly sexual, interpretation of each card. Variety and inclusivity are apparent throughout; we have heterosexuals, gays, lesbians, group sex, kink and masturbation. There are different colours and sizes, big bellies and small ones, cocks large and small, limp and erect. The only real sadness is that the images are reproduced so small that much of the fascinating detail is often hard to make out.

Tarot Erotica was produced by QED Games of New York.

We are very grateful to our American friend Ryan for sharing these images with us.