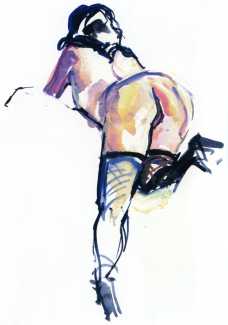 The ‘Art Class’ paintings in Sylvie Jones’ Sex Diary take us through a year of regular involvement in a life drawing group that many artists would give a great deal to experience, but which alas are almost impossible to find or organise.

Early in 2000, she heard about a group organised by the artist Paul Woods in his studio in the London suburb of Ealing, where artists could draw and paint life models who were happy to pose sexual scenes for the sitters. As she describes her first session, ‘The audience was a bit on edge, as two of us had never attended before. There were four nondescript middle-aged men and me; three of us were artists. I was last in, and had to do with a marginally restricted view, not that there was room to swing a pussy anyway.’

Sylvie’s hundred or so pen and watercolour sketches in the Diary, of which just a few are reproduced here, show her to be an artist who can catch the flavour and excitement of sexual encounter, qualities which can best be experienced when in the company of real models. They are qualitatively different, many might say better, than her carefully prepared illustrations, and demonstrate a way of painting eroticism which is a direct experience of being involved as an artist.