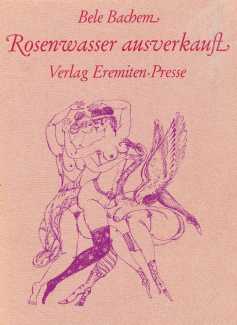 These chapters carry changeability.
They taper off in purple and yellow at the edges.
Red is used in doses.
On mouths, cheeks and shoe tips – set point-like.
Sometimes, however, the red pours over a whole group,
there is a reason for that.
Far away in a blue haze sit the opium eaters
and the cocaine-hungry black beauties.
Marijuana flowers sprout from their bedside tables,
and there are bouquets of hemp in the hall.
Stir – try hard.
Gold-fingered, ring-fingered, thumb-accented travel companies.
Keep the milk finger hidden.
The hotels are glass palaces, others marble carvings;
those who know how to travel can find silk.
The long-legged mare of a Russian emigrant
places a diamond the size of a chicken.
He fell into Scheherazade’s shroud.
Nobody knows how white her shroud is.
Wolves in silk sandals rush through the night.
Get the fat man’s hands out of the closets!
Spread your fingers against the evil eye.

Thus begins Rosenwasser ausverkauft (The Rosewater is Sold Out), Bele Bachem’s psychedelic poem sequence, written by her and illustrated with twenty-four of her trademark engravings, eight of them in colour. Each of the complex images can be read as a commentary on German society in the 1970s, many of them having telling captions like ‘The Loving Couple’ and ‘Three Graces Too Many’.

Rosenwasser ausverkauft was published by Verlag Eremiten-Presse, in a limited numbered and signed edition of 500 copies.