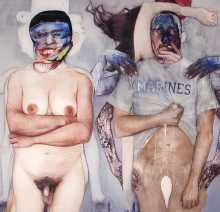 The reception and significance of Chadsey’s trademark drawings is very much down to each viewer’s interpretation and sensibilities, so rather than attempting to describe his imagery and technique we offer two recent reviews of his exhibitions at the Jack Shainman Gallery.

In his watercolour pencil drawings, Geoffrey Chadsey depicts characters that embody an uncanny, unbalanced mishmash of malleable flesh and warped psyche. Made using a rendering technique that echoes the dense curving and parallel lines used in engraved likenesses of presidents on paper money – or, more broadly, a plastic surgeon’s felt-tipped notations on bare pre-op skin – the nearly life-size figures often seem graphically gestural. They look practically charged with electric current, particularly around their nipples. Chadsey’s source images seem to be harvested from random Flickr pages or hook-up websites – the imperfect bodies, ordinary furniture, and flat lighting are all the stuff of private worlds made public online. It is with a deft hand and a peculiar vision that the artist manages to construct works imbued with such memorably freakish integrity.
— Glen Helfand

The Brooklyn-based artist Geoffrey Chadsey is known for his meticulous water-soluble-pencil-and-crayon drawings on mylar of unnerving figures in various states of undress. They bare themselves ‘while kind of glaring at you’, Chadsey says of his invented subjects, who he frequently bestows with ambiguous forms and states of mind — a portrait might feature a hairy chest and curvy hips, a ghostly set of extra limbs, or a fanny pack and antlers.
— Daniel Penny