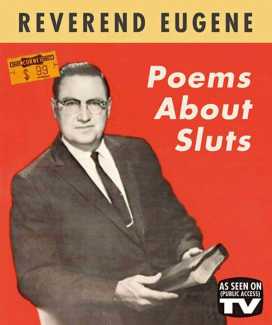 The initial impulse for Eugene Drabkin’s Poems about Sluts series came from reading about a collection of satirical children’s book covers which had recently been published in the USA and subsequently withdrawn. In December 2016 Abrams, the venerable publisher of illustrated books, issued a statement saying that they would pull their title Bad Little Children’s Books: KidLit Parodies, Shameless Spoofs, and Offensively Tweaked Covers, after it generated extensive online controversy. The book was a collection of fake covers for Little Golden Books-style children’s stories, with an emphasis on fake. They were often outrageous and provocative, with titles like Peeping Tommy Goes Cougar Hunting, Don’t Lick the Stripper Pole, Cousin Milky is Lactose Intolerant, and The Blind Child’s Picture Dictionary.

The one which unsurprisingly, given the fictitious author’s name, caught Drabkin’s attention was Reverend Eugene’s Poems about Sluts, which sent the artist’s imagination spinning, resulting in a wonderfully colourful series of drawings of prostitutes and their clients in a variety of settings and situations. The subject matter suits Drabkin’s style perfectly, each vignette offering a whole storyline of possible narrative.

Poems about Sluts proved so popular that Drabkin followed it up a couple of years later with a complementary series of drawings, Sluts Strike Back, featuring women taking subtle and not-so-subtle revenge on their male clientele.