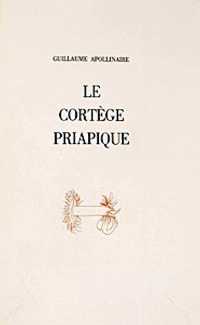 Le cortège priapique (The Priapic Procession) is advertised on the title page as being by the poet Guillaume Apollinaire, but this is stretching the truth, as only two of the poems, Chapeau de tombeau and 69666, are by Apollinaire, the others in the collection being variously attributed to Pascal Pia and Raymond Radiguet.

This edition was printed at the expense of the Dutch writer Eddy du Perron, to whom André Malraux later dedicated La condition humaine. It was produced in a limited numbered edition of 180 copies, printed in two colours, the Prassinos illustrations being in reddish brown.