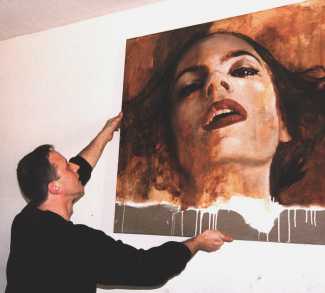 Yarek Godfrey’s passion was the sensual, primal – some might say crude and stereotyped – depiction of the naked or semi-naked female body, with a particular predilection for an emphasis on the fully-displayed vulva. He clearly loved cunts, with a tendency to worship them; how he related to them in the real world we can only guess.

The paintings of Yarek Godfrey glow in the ochre colours of Stone Age cave paintings. This is how they should be viewed – by the faint light of flame torches. The paintings with which our ancestors adorned the walls of their caves were used for evocation. They knew about death. It is the meeting of death and eroticism that elevates human sexuality above the animal level.
Yarek Godfrey’s images lead us back to these Neolithic caves. They too are evocations of eros and death. They lead us back to the palaeolithic of our psyche, an inner palaeolithic, in which the erotic is still dominated by inevitable tragedy.
But Godfrey is no savage. His effects are calculated, and all too often he paints over his pictures again and again, destroying them in order to recreate them, hence the dripping paint and clear overpainting. Because of the large format of his pictures, the artist has to repeatedly step back from the picture in order to convince himself of its effect. His whole body is involved. Thus many of his pictures are the result of being overpainted three or more times, with the result that the erotic glow increases more and more.
That this young artist is not crushed in the inner conflict that gives him the impetus for art guarantees him the old masterly versatility with which he masters his craft. This enables him to descend into the old caves and the inner depths, and at the same time to keep his head in the real world.
Yarek Godfrey is not a body despiser. He loves what threatens him. He loves his beloved witches.