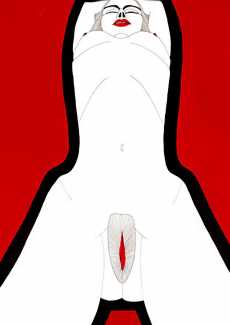 Most of Kitty Brophy’s works on paper are no bigger than sketchbook pages, yet each packs a punch. Her palette is spartan – nothing but midnight black, blinding white and blood red. The people in her pictures wear nothing at all, except on occasion a leather mask or a noose. Most are close-ups, with limbs extending past the paper’s edges. Some depict individual figures in extreme and extremely vulnerable positions. Others show multiple figures, their torsos tangled together or stacked in stylised patterns. Genitals claim centre stage.

The vulnerability of Brophy’s subjects and the intimacy of their depiction never suggest that they are victims. Always powerful, self-possessed and cognisant of what they want, they are not to be messed with. Their power is evident in the wickedly sensuous lines with which Brophy has drawn their contours, following the curves of thighs, cheeks, ribs and elbows with grace and decisiveness.

Up to the end of 2015 her drawings were in simple black ink, often clearly autobiographical with captions and poems. Then in 2016 the trademark red appeared, along with stylised celebratory depictions of vulvas and cocks. Since then she has devoted herself to graphics which explore sexual themes in her own terms, often using carefully-composed selfies as reference. She gives these bold, exquisitely delineated compositions that frequently isolate and emphasise the sex organs explanatory titles which match the directness of the artwork – ‘Out and Proud’, ‘Choose Me’, ‘Just Because I’m On My Back Doesn’t Mean I’m Not In Charge’. As she explains, the transition from a Catholic girl’s body shame, to abusive scrutiny as a model, to autonomous self-expression, has been liberating. ‘Screw that,’ she says, ‘I’m showing everything and I own it.’

Her latest works from 2020, including ‘And She Lived Happily Ever After – The End’, appear to suggest that the ten-year creative period which has produced Kitty Brophy’s artistic output to date is possibly about to transition into something even more exciting.