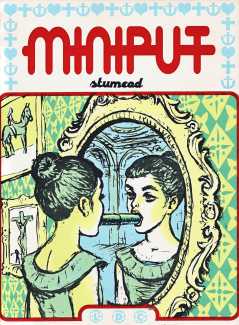 Miniput, the second Mead portfolio published by Le Derner Cri, contains paintings made between 2000 and 2003, after Stu Mead had moved permanently to Berlin. Miniput is a nonsensical title made up by Pakito Bolino and Mead, derived from the French word for whore, ‘pute’; the portfolio was produced in an edition of 500 copies.

The years in which the paintings were made were when Mead’s work was becoming more widely known in Europe, helped by exhibitions in Berlin, Paris and London, and the publication of Adam Parfrey’s Apocalypse Culture II.