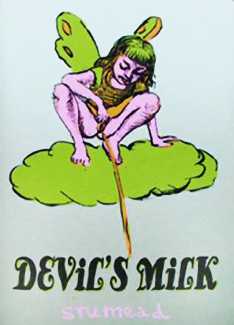 Devil’s Milk – the portfolio’s cover is all the explanation of the title required – was Le Dernier Cri’s third Mead album, containing new paintings made between 2004 and 2007.  During this period religious imagery increasingly impinged, no doubt influenced by the destruction in 2004 of The First Communion during the group exhibition When Love Turns to Poison at the Kunstraum Bethanien in Berlin. A devilish Satanic figure appears, along with a malevolent clown, a father figure bent on hands-on chastisement, and an alligator interrupting the sermon. Many of the paintings in Devil’s Milk were produced for Mead’s first exhibition in Tokyo.

Devil’s Milk was produced in a limited edition of 500 copies.