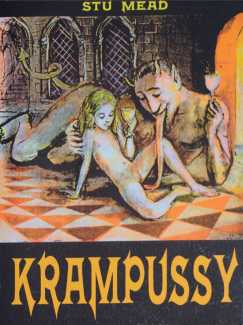 Krampussy is the fourth and latest portfolio of Stu Mead paintings published by Pakito Bolino’s La Dernier Cri, this time in a limited edition of 150 copies. Krampussy comprises paintings made by Mead between 2007 and 2009, which during this period regularly featured a lascivious long-tongued devil. The title, suggested by Bolino, is derived from Krampus, the devilish companion to St Nicholas who threatens to drag naughty children to hell to be punished for ever.

If anyone thinks that Stu Mead will succumb to adverse criticism, they need to think again. The French art critic Xavier-Gilles Néret, in a 2020 article entitled ‘Stu Mead, the Last Nympholept’, writes, ‘In recent years Mead has admitted to being a little weary of producing ‘extreme images’, in large part because of discouraging developments in present-day culture, crushed by a moralising attitude that wants to rule over our bodies and souls. But he is clear that he is not going to stop. Whether smoking, sucking, copulating, bathing, relieving herself, or simply showing off her nakedness, the nympha stumeadiana is not about to slip away. She will survive the invectives of her mediocre detractors, however numerous and noisy they are. She will continue to bewitch the melancholic beings who succumb in pleasured silence to her ineffable charms.’