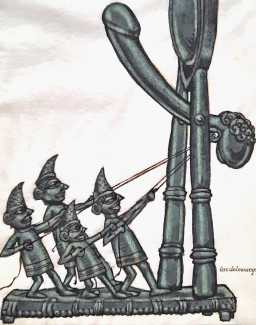 The Schloss Marcipan (Marcipan Castle) portfolio demonstrates more than any of his other work the depth and breadth of Behmer’s wit and creativity. In around 1934 he started to create this wonderful series of watercolour paintings of imagined homoerotic artefacts from ancient civilisations, gathered together in an equally imaginary castle. The marzipan castle, replete with towers and turrets, is a staple of the window display of high-class German delicatessens; for the stately home of his collection Behmer changed the ‘z’ to a ‘c’ to match the ‘c’ in his own first name.

In the early 1950s Behmer revisited his Schloss Marcipan collection. After the war his financial situation was precarious, and he was hoping to find a private buyer in Berlin for the whole portfolio. He put the precious drawings together in folder together with a handwritten ‘catalogue’, and showed them to various potential clients, but when in 1956 they had still not found a home Behmer decided to donate Schloss Marcipan to the Städel Museum in Frankfurt as a gift. The graphics curator at the time, Kurt Schwarzweller, was appreciative of Behmer’s work, and from the documentation accompanying the gift we know that the prime inspiration for the carefully-imagined artefacts in the portfolio came from a reading by Behmer of the author Eduard Mörike's short 1888 novel Du bist Orplid, mein Land! (You are Orplid, my country!).

In Mörike's story, two young men, Eduard and Ludwig, are studying theology at the seminary in Tübingen. Feeling smothered by the disciplined life of the seminary, they create an imaginary land called Orplid, an island realm where heroes live, free of hunger or illness. Though written as a novel, Du bist Orplid is largely autobiographical, Eduard and Ludwig being the close friends – and quite possibly lovers – Eduard Mörike and Ludwig Bauer. As well as Du bist Orplid, Mörike wrote a play called Der letzte König von Orplid (The Last King of Orplid), while Bauer wrote a play entitled Orplids letzte Tage (Orplid’s Final Days).