My Troubles with Women 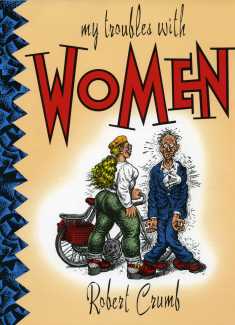 My Troubles with Women is Robert Crumb’s best-known account of his lifelong issues around sex and intimacy, a sort of cartoon deep therapy session and personal confessional with which so many of his readers have more or less identified.

First published in Zap, this archetypal strip became the lead and title of a book of Crumb cartoons published by Last Gasp in 1992, and reissued by them with the current cover in 2000. The Last Gasp edition also includes a second instalment, My Troubles with Women Part II, which was originally published in Hup magazine in 1986.

As one reviewer at Goodreads writes, echoing the reactions of man others, ‘An embarrassing, realistic portrait filled with humour and irony of the darker sexual fantasies of men, the imagined slights and petty envy, interspersed with tedious reality of everyday life. It all rings painfully true.’