Mr Natural Wants to Talk to You 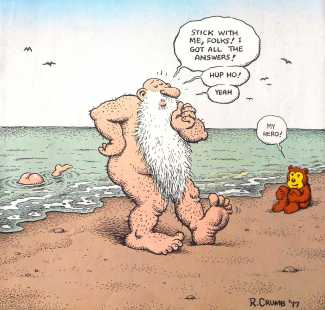 Robert Crumb’s archetypal guru, Fred Natural, first appeared in the underground comic Yarrowstalks in 1968, and during the 1970s and 80 was one of Crumb’s favourite characters. He made his final appearance in 2002 before disappearing into the mystic ether.

Mr Natural spouts aphorisms on the evils of the modern world and the salvation to be found in mysticism and natural living. Bald and with a long white beard, when not naturally naked he usually wears a gown which gives him the appearance of an ancient prophet. He has strange, magical powers and possesses cosmic insight; but he is also moody, cynical, self-pitying, and suffers from various strange sexual obsessions. He is endlessly being accosted by would-be disciples seeking the truth, who he regards with amused condescension and a certain grudging affection, although his patience often wears thin and he takes sadistic pleasure in making them feel like idiots. While he is typically very cool and in control, he sometimes ends up in humiliating predicaments including languishing for years in a mental institution.

In this late Mr Natural story, which first appeared in Weirdo and was later coloured for the 2015 Taschen collection R. Crumb’s Sex Obsessions, our wise guru reflects on what can happen when a needy male human with attachment issues is invited to become truly free and enjoy all that the world has to offer. Inevitably, for this is a Crumb tale, he fails.