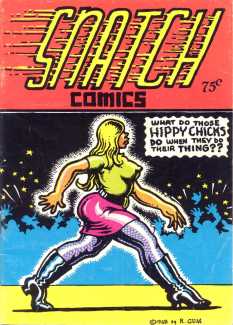 This is the first of the three issues of Snatch to be published between late 1968 and the spring of 1969, and what is most obvious about it is its crude rebelliousness, almost designed to shock and disgust.

Interacting with his peers in underground comix circles in California had a liberating and stimulating effect on Crumb’s work. S. Clay Wilson was a true rebel, who renounced the tenets of the art establishment for the vernacular of the streets. ‘For better or worse, Wilson’s influence began to show in my work,’ says Crumb. ‘I too became a rebel. I cast off the last vestiges of the pernicious influence of my years in the greeting-card business. I let it all hang out on the page. Seeing what Wilson had done just gave me the last little push I needed to let open the floodgates. Blatant sexual images became a big thing, still happy and positive at first – a celebration of sex.’ Tired of hearing about going too far with sexual themes, Crumb and Wilson resolved to show their critics just how far they could go, and Snatch was born.

The inspiration for the look and style of Snatch was the small-format, racy cartoon books for men that were sold in smoke shops and in the back racks at news stands. Crumb was turned on by the idea, and started drafting an imitation of one of them, only raunchier, and that’s how Snatch started. They ran off eight hundred copies to test the market; Moe’s Books in Berkeley bought most of the first printing and sold the books openly in their store.

Unsurprisingly, all the sweaty, bulbous cartoon characters fucking and sucking immediately drove away most female readers, and drew the ire of the nascent feminist movement, not to mention the highly dubious racism implicit in many of the images. Snatch was short-lived, but shows Robert Crumb, encouraged by Wilson, in the first stirrings of his new-found sexual freedom.

Most of the Snatch drawings were by Crumb (under various versions of his name like Krumb and Grub), but Wilson also contributed five of the pages of Issue 1, identifiable by his signature or initials.