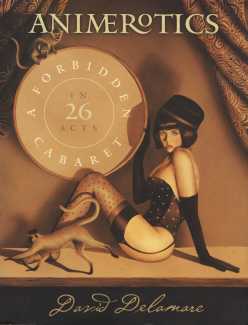 Animerotics: A Forbidden Cabaret in 26 Acts is a true artistic tour de force. Every aspect of this large-format paperback, from the rich sepia paintings with their wealth of detail to the explanatory text of the gripping introduction, is carefully designed and brilliantly executed. The back-story of Animerotics, ‘A Brief History of Alphonse Zukor’s Animerotic Cabaret’, is a wonderful narrative romp through the world of late nineteenth century vaudeville. Written jointly by David Delamare and Wendy Ice, it tells how the strange Zukor was brought up in a family where his father had a secret library, with the result that by the age of eight ‘Alphonse could recite from the works of the Marquis de Sade and name each of the positions in the Kama Sutra’. But then one afternoon he was struck by lightning and was never the same again. When he was nineteen his father died, and Alphonse started collecting animals, and women to look after them; seven years later the cabaret went on the road.

The twenty-six alphabetic images are imagined as the show cards for the itinerant cabaret, each worthy of careful perusal for the rich imagery and carefully-observed detail they include. The women in the paintings are all drawn from life, and are utterly believable, thus helping to blur the boundary between fantasy and reality.

Animerotics was published by Collectors Press, Portland. Though out of print, affordable copies can still be found in the usual places.