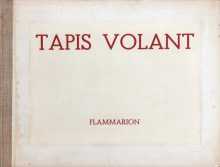 Tapis volant (Flying Carpet) is Jean Boullet’s first published work, appearing when he was just twenty-five years old. Though the details are sparse, it is clear that the young Boullet had already made the acquaintance of Jean Cocteau, probably through both of them being involved in the French Resistance; another influential gay activist in their circle was the author and activist François Sentein. It was probably these connections that encouraged Boullet to complete a portfolio of drawings and find a publisher.

The portfolio was produced first in a small edition, with a short handwritten prologue by Cocteau, by the Paris publisher Paul Dupont. It was then reprinted later the same year by Flammarion in a limited numbered edition of 427 copies.