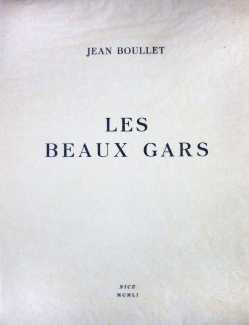 Les beaux gars (The Handsome Guys) is one those portfolios that contains exactly what it says on the cover, no more and no less. This is the first of two textless collections privately published by Boullet, using his printing company’s name as his publisher; the second was Antinoüs three years later.

Les beaux gars is little more than a way of bringing a representative selection of Boulet’s drawings together in a way that he hoped would sell and provide him with some income; several of the drawings had previously been published elsewhere, and others would appear again, sometimes in a slightly different version, in Antinoüs.

Several of the portraits bear  the signs of drawing from life, or from photographs, of some of Boullet’s lovers. Others seem more fantasy-based, or in the case of the youth bound to a stake the perils of homoeroticism.

Les beaux gars was published by the Société d’Imprimerie Méditerranéenne, Nice, in a limited numbered edition of 150 copies.