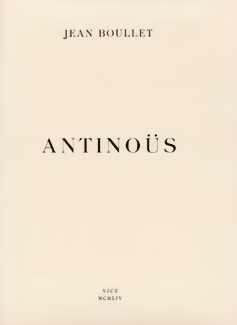 By the time Boullet produced the drawings published in a loose portfolio with the title Antinoüs, the first-century Greek youth from Bithynia who was a favourite beloved of the Roman emperor Hadrian had become a potent symbol of male homosexuality in Western culture, appearing regularly in the literature of authors including Oscar Wilde and Fernando Pessoa.

The historic Antinoüs (Antinous or Antinoös), who died prematurely shortly before his twentieth birthday, was deified on Hadrian's orders, being worshipped in both the Greek East and Latin West, sometimes as a god and sometimes merely as a hero. Little is known of his life, although it is known that he was born in Claudiopolis (present-day Bolu in Turkey), in the Roman province of Bithynia et Pontus. He was probably introduced to Hadrian in 123, before being taken to Italy for a higher education. By 128 he had become the favourite of Hadrian, and was taken on a tour of the Roman Empire as part of Hadrian’s personal retinue. In October 130, as they were part of a flotilla going along the Nile, Antinoüs died in mysterious circumstances; various suggestions have been put forward for how he died, ranging from an accidental drowning to suicide.

Following his death, Hadrian deified Antinoüs and founded an organised cult devoted to his worship that spread throughout the Empire. Hadrian founded the city of Antinoöpolis close to Antinoüs's place of death, which became a cultic centre for the worship of Osiris-Antinoüs. Hadrian also founded games in commemoration of Antinoüs to take place in both Antinoöpolis and Athens, with Antinoüs becoming a symbol of Hadrian’s dreams of pan-Hellenism. The worship of Antinoüs proved to be one of the most enduring and popular of cults of deified humans in the Roman empire.

In this portfolio of drawings, with no accompanying text, Jean Boullet sets out his vision of a beautiful youth who died too young. Boullet may have had Antinoüs’s demise in mind as he contemplated his own suicide.

Antinoüs was published by the Société d’Imprimerie Méditerranéenne, Nice, in a limited numbered edition of  467 copies.