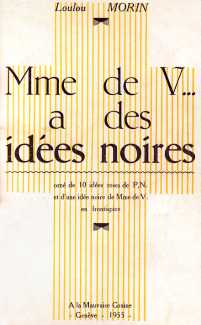 Mme de V… a des idées noires (Mme de V… has Dark Thoughts) is a slim volume purporting to be the intimate memoirs of an aristocratic woman as she lays out her thoughts and exploits in a tale of rural debauchery not a million kilometres from Lady Chatterley. The author is given as Loulou Morin, which is either a pseudonym for the French novelist and poet Marie Louise Lévêque de Vilmorin (1902–69), whose pet name was indeed Loulou, or is intended to suggest that the text is by her.

Marie Louise de Vilmorin was quite a character, engaged briefly to novelist and aviator Antoine de Saint-Exupéry, married and divorced ten years later to American real-estate heir Henry Leigh Hunt, then married to Austrian-born Hungarian playboy Count Paul Pálffy ab Erdöd. Her circle of admirers was large, including the composer Francis Poulenc and Hungarian aristocrat Paul Esterházy de Galántha, and later in her life she was a lover of Duff Cooper, the British ambassador to France, and of the French Cultural Affairs Minister and author André Malraux.

Mme de V… was published by the prolific publisher of clandestine literature Eric Losfeld under the imprint À la Mauvaise Graine (‘of the bad seed’), and was duly prosecuted in September 1957, which only succeeded in making it more desirable.

No artist’s name is given for the book’s illustrations, but it is accepted that all but the frontispiece are by Boullet, which makes them some of the only drawings he made of heterosexual lovemaking.