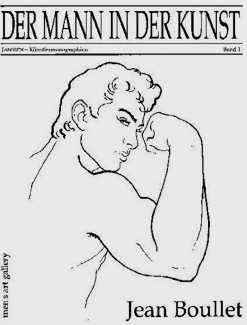 In this section we have included Boullet drawings which as far as we know were not included in any of his published works. Several of them are reproduced in the 1992 Janssen portfolio of Boullet drawings published as Volume 1 of their homoerotic series Der Mann in der Kunst (The Man in Art).

Some of the drawings are very explicit, which is presumably why they were not published in his lifetime, while the last two are rare depictions of naked women.