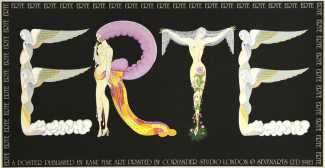 Erté’s Alphabet is among his best-known works, started in the late 1920s but not completed until nearly half a century later. It probably includes as many semi-naked bodies as all of the rest of his work combined.

The development of Alphabet is best described in Erté’s own words: ‘I started to work on the series of Alphabet paintings in 1927, after a very successful exhibition at the Galerie Charpentier in Paris. This gallery proposed another exhibition two years later for which I had planned to complete Alphabet. Unfortunately, I was much too optimistic. I had not realised how much other work I would have to do at the same time. There was my contract with Harper’s Bazaar, and for the theatre, working on three major spectacular productions in two years as well as the usual tableaux for the Folies-Bergére and several operas. The result was that in 1929, when my second exhibition opened, Alphabet had not made much progress. From then on, little by little, I did complete one or two letters between various urgent commissions, but it was only forty years later that I finished the set. In 1967 I was asked to exhibit Alphabet at an Erté show in London. This time I was ready – or at least I thought I was. While preparing to send the pictures to London, I suddenly noticed to my astonishment that one letter was missing in the series; it was the letter L. I began to paint it immediately and completed it just in time for the show. As it turned out, this letter became the most successful of all in the eyes of the public.’