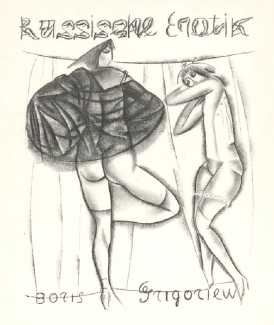 Few of the purchasers of Intimité ever had a chance to see its ‘sequel’, Russische Erotik (Russian Erotica), which was privately published in Berlin. The new portfolio went far beyond the stylisation that characterised the Silver Age’s erotic dreams, indeed its power is proven by its later history – most examples of the portfolio were destroyed in the purification campaigns of 1930s Germany. Also, it is interesting to note that when in 1924 six of the milder images from Russische Erotik were selected for inclusion in a Moscow-published collection of Gregoriev’s stories, Moskowitische Eros (Moscow Eros), the more risqué were deliberately omitted.

As a result of the Nazi campaign to destroy censored work, sets of Russische Erotik are now exceptionally rare.

Russische Erotik was privately published in a limited numbered edition of 300 copies.