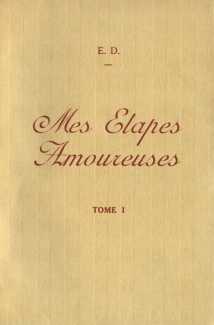 The authorities on French erotica of the period follow the lead of Jean-Pierre Dutel and Jean-Jacques Pauvert in ascribing the initials to one Edmond Dumoulin, but given there is no evidence for an author of that name it is hard to imagine that it is anything more than a generic attribute to an author who was producing text from the mill (moulin) of erotica. Other names suggested for E.D. are Émile Desjardins and Édouard Demarchin, but neither connects with a known author, the gardens (jardins) and marches (strides) also being rather suspicious.

Whoever the author Mes étapes amoureuses might be, the two volumes follow a rather pedestrian format of a young woman exploring her sexual awakening, with chapters titled ‘Promising beginnings’, ‘I am making significant progress’, ‘A skilful maid’, ‘Finally, I undress her’, ‘Delicious afternoon’, and finally ‘Journey to the moon’. The book was first privately published in 1890, so is the earliest known E.D. title; this illustrated edition was published by Marcel Seheur in a limited numbered edition of 500 copies.