Georges Conrad is one of those prolific illustrators of the early twentieth century of whom little biographical information is recorded, and what little there is is regurgitated in every reference to the artist. We know that he grew up in Aubervilliers in the north-east suburbs of Paris. The son of a Paris valet, his artistic skills were sufficient to secure a place at the École des Beaux-Arts (School of Fine Arts) in Paris in 1894.

During the 1914–18 war his skill in drawing military scenes saw him producing patriotic postcards and illustrating publications like La France Héroïque (Heroic France). He continued to produce commissions for Fayard, including in 1930 some very tame illustrations for Théodore Gautier’s Mademoiselle de Maupin.

Married twice, his second wife came from Normandy, where Conrad had moved in 1929 to take a post as professor at the École des Beaux-arts (School of Fine Arts) in Rouen. Conrad produced illustrations for books about Normandy, but also maintained a close link with Paris, maintaining studios both there and at his home in Val-de-la-Haye, south of Rouen. 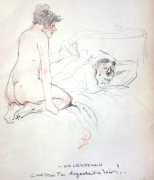 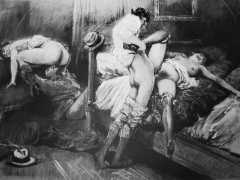 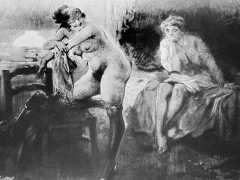 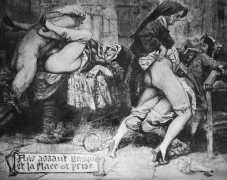 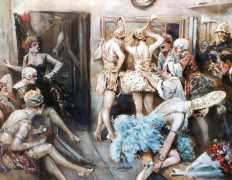