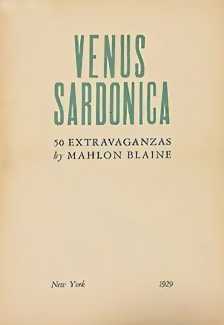 As Roland Trenary writes in Mahlon Blaine: One-Eyed Visionary, ‘Blaine’s coming of age was by way of the 1920s bohemian culture of California, and he seemed well attuned to a modern artist’s sensibility of nudity, sensuality and sexuality, no doubt reserving a portion of his portfolio as a home for demons, damsels, creatures and creaturettes, nakedly engaged in one improbable interaction or another’.

In New York in 1929 Blaine decided to publish a portfolio of his clever drawings combining fantasy and sexuality. He called it Venus Sardonica, the ‘sardonic’ implying exactly the sense of critically mocking the sexual mores that he was exploring in his magnificent extravaganzas. Each of the fifty drawings depicts part-humans, part-creatures involved in a wide variety of sexual interactions.

Venus Sardonica was produced in a very limited edition – each of the fifty original drawings was put into a folder along with prints of the other forty-nine, thus limiting the edition to fifty copies. What evidence survives suggests that the portfolio was sold for a hundred dollars a set, a very high price for an album at the time. It was reissued just once a couple of years later, this time with a green and black title page.