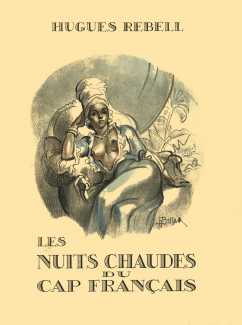 ‘I come from a better breed than you pale-faces,’ said Zinga. ‘See if the whiteys have tits like these!’
She opened her shirt and showed him her breasts, large and firm. As he leant forward to kiss her, she avoided his advances, laughing. Quickly she let the clothes fall; the fine material in which she was wrapped crumpled around her shoulders and hips, fell at her feet, and she appeared naked as a bronze idol. For a moment she enjoyed the admiration of Dubousquens, who abandoned his air of pride and carelessness before this superb nudity, his mouth greedy, his eyes shining. But soon the idol came to life, launching into graceful games. Dubousquens held out his hands, but they closed on the empty space. Zinga ran through the room, slipped behind the furniture.
Her twists and turns seemed to be nothing but a voluptuous mischief, to make as much as possible of the beauties of her sex, the grace of her breasts made more apparent, her vast rump which she flaunted. Finally he grabbed her and hugged her to him. He took her full length on the sofa, and she struggled playfully, moving her majestic buttocks under his firm grip. 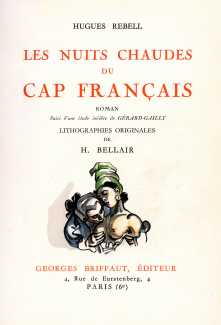 Fruit of the overflowing imagination of its author, the action of the hot nights takes place in the Caribbean island of Santo Domingo, which later became Haiti. Grassal had never been to the Caribbean, but he was able, no doubt due to good documentation, to bring to life the world of plantation and slavery. He even prided himself on being able to write basic Creole, which gives a touch of authenticity to the story. Through colourful characters like the busty black maid Zinga and the mistress Kouma-Toulou, Grassal portrays the world of colonialism with its intrigues, violence, slavery and racism. Ubiquitous sexuality permeates social relations, especially between masters and slaves, and reflects the reality of the multiple sexual interactions, often violent and unwilling, which lay at the heart of the colonial system.

Henriette Bellair’s accomplished drawings, with their intelligent use of light and shade and their subtle colouring, succeed in being the best set of illustrations created to accompany this popular novel.

This edition of Les nuits chaudes du Cap Français was published by Georges Briffaut in a limited numbered edition of 1,668 copies.