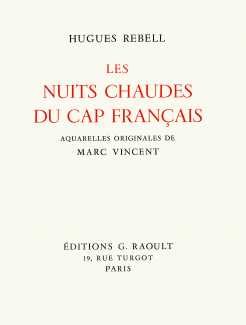 Fruit of the overflowing imagination of its author, the action of the hot nights takes place in the Caribbean island of Santo Domingo, which later became Haiti. Grassal had never been to the Caribbean, but he was able, no doubt due to good documentation, to bring to life the world of plantation and slavery. He even prided himself on being able to write basic Creole, which gives a touch of authenticity to the story.

Through colourful characters like the busty black maid Zinga and the mistress Kouma-Toulou, Grassal portrays the world of colonialism with its intrigues, violence, slavery and racism. Ubiquitous sexuality permeates social relations, especially between masters and slaves, and reflects the reality of the multiple sexual interactions, often violent and unwilling, which lay at the heart of the colonial system.

This edition of Les nuits chaudes du Cap Français was published by Éditions G. Raoult in a limited numbered printing of 1,000 copies, and presented in a gold-embossed red binding in a matching red carton.