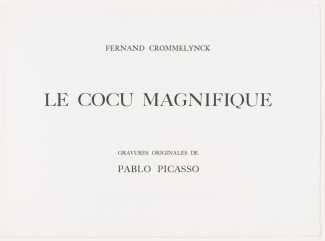 Through the imagery, Picasso injects intrigue and mystery into his conflicting views of faithfulness and secrecy. The imagery also demonstrates Picasso’s appreciation of the female body, as seen in his other works, and perhaps many of his suspicions about a woman’s secret longings. Executed in the unmistakable style of the artist, these figures are a combination of simplified geometric and organic forms. Picasso’s ability to create such beguiling imagery that so adroitly tells a compelling and complicated story provides further evidence of his profound contribution and enduring influence to twentieth-century art.

Le cocu magnifique was produced in a limited numbered edition of 200 copies.