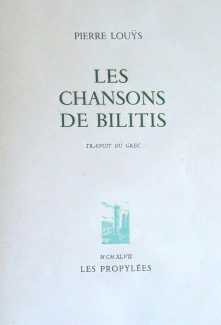 Several illustrated editions of Bilitis appeared in the 1940s, the best known those of Suzanne Ballivet and Paul-Émile Bécat in 1943, followed by this Minache-illustrated edition four years later. Génia Minache’s soft drawings have something of the quality of the work of Mariette Lydis, whose work she would have been familiar with.