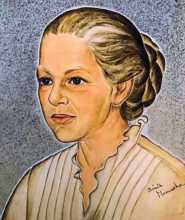 The Russian-born painter, graphic artist and sculptor Génia Minache used her French name, rather than the Russian Zhenya Minash, for most of her illustration work. Daughter of the St Petersburg architect Sima Isaakovich Minash (1877–1945), she moved with her family after the revolution of 1917 first to Prague, and then to Paris. In the early 1930s she studied at the École Nationale des Arts Décoratif (National School of Decorative Arts), painting mainly in gouache and watercolours in an Art Nouveau style.

In 1931 she took part in the exhibition of the Art section of the Association of Russians who had graduated from higher educational institutions abroad (OROVUZ), and won first prize for a sculpture ‘The Black Thinker’; in 1934 she held her first exhibition at the Bernheim-Jeune Gallery.

She married Savely Markovich Khadzhi in 1932, and moved with her husband to Pilsen in Czechoslovakia, holding exhibitions in Pilsen and Prague. In 1938 she showed a series of pen and gouache drawings, ‘Czech Costumes’, at the Parisian Office of Czech Tourism. She returned to France just before the war, and divorced in 1946.

Zhenya Minash visited the USSR in 1965, reconnecting with relatives in Moscow and participating in charity sales for causes that were important to her. 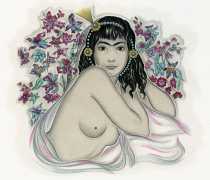 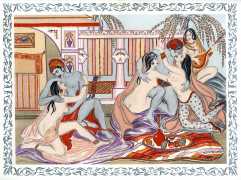