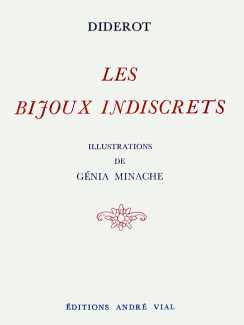 Les bijoux indiscrets was Génia Minache’s last book commission, completed just three years before her death, and the colourful detailed paintings are some of her finest work.

The Minache-illustrated Les bijoux indiscrets was published by Éditions André Vial, Paris, in a limited numbered edition of 900 copies.