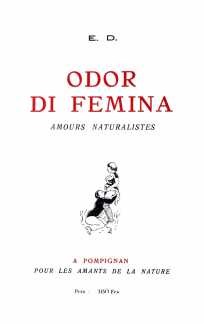 Odor di femina: amours naturalistes (Feminine Fragrance: Naturalistic Loves) is one of several titles which first appeared around the turn of the twentieth century, written by an author who signed him (or her) self ‘E.D.’ The authorities on French erotica of the period follow the lead of Jean-Pierre Dutel and Jean-Jacques Pauvert in ascribing the initials to one Edmond Dumoulin, but given there is no evidence for an author of that name it is hard to imagine that it is anything more than a generic attribute to an author who was producing text from the mill (moulin) of erotica. Other names suggested for E.D. are Émile Desjardins and Édouard Demarchin, but neither connects with a known author.

E.D. also wrote Mes étapes amoureuses (My Stages of Love), which you can see illustrated by Conrad here. Other E.D. titles include Jupes troussées (Pencil Skirts, 1895), L’odyssée d’un pantalon (The Story of a Pair of Knickers, 1889), Mes amours avec Victoire (My Loves with Victoria, 1900), and Memoires d’une danseuse Russe (Memoirs of a Russian Dancer, 1905).

Odor di femina is little more than a litany of pedestrian sexual conquests involving the writer, Colette, Madelon, Janine, Marianne, Suzanne, Angelique, Hermine and Gracieuse in a variety of encounters including threesomes and beyond.

This edition of Odor di femina was published by the well-known clandestine Paris publisher Maurice Duflou, under the imprint ‘A Pompignon: pour les amants de la nature’ (Pompignan is a real place, north of Toulouse in southern France). The typically Conrad illustrations are rather crudely printed in black and red.