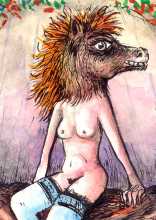 Un boxon d’enfer (One Hell of a Brothel) is an amalgamation of Jannin’s contributions to two collective exhibitions in the Paris gallery Le Cabinet d’Amateur.

The titles – Un Boxon d’Enfer and Striptease – were set by the gallery, but as Jannin prefers not to be limited by other people’s titles, and by his own admission has never set foot in a brothel or a striptease club, he chose to let his imagination loose on the whole idea of sex being for sale. As he explains, he prefers to keep his fantasies grounded in the real world.

He writes, ‘Are we really talking about pleasure, or about its consumption? Surely the whole point is making money. So my brothel is in a sort of hell. The beings who inhabit it, customers as well as prostitutes, are all decked out in animal heads. So my pictures look as much like the drawings in scary children’s books as they are images of any actual brothel. Plus I like drawing buttocks, so I had fun with those.’