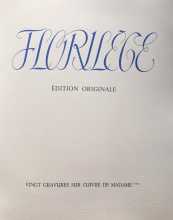 No publisher’s name is given in the limited numbered boxed edition, of which 195 copies were printed.