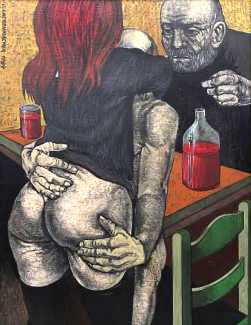 Interior compositions with naked woman were always an important part of Lackenmacher’s output. These paintings are dominated by well-proportioned, often full-bodied women, who appear in close-up in enticing and daring poses that appear again and again in his work. In many ways they became Lackenmacher's trademark. Despite the emphasised physicality – sweeping hips, lush décolleté – the plasticity of the bodies is contained by a strict linear outline and carefully-considered palette, revealing in his paintings Lackenmacher’s inclination towards graphic design.

Many of the paintings, especially the later ones, also include the painter’s unmistakable bearded head, and occasionally other parts of his anatomy.