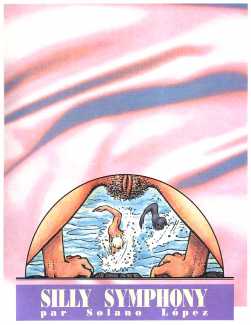 They were called Silly Symphony partly in homage to the famous series of animated shorts produced by Disney studios in the 1930s. Like those short cartoons, each story is quickly assimilated, the narrative is simple, and there are no recurrent characters; unlike Disney, however, the constant theme in López’s strips is the call of sex, stripped down to its questionable basics.

In 2001 the collection was reissued by Eros Comix, this time under the title Sexy Symphonies, maybe because there was concern that an American edition sharing the Disney title might be liable to copyright issues. Sexy Symphonies was again reissued in 2013 by Dynamite, which is still in print.

We have included three of the nine ‘stories’; the complete Silly Symphony/Sexy Symphonies can be found in many places as (variable-quality) downloads on the internet.