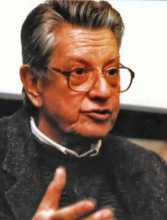 The Argentinian artist Francisco Solano López was a major figure in the world of international comics for nearly six decades. He was known in Argentina for the science-fiction epic El Eternauta (The Eternal Voyager); in Europe for the bleak political drama Ana and the dark police series Evaristo; and in Britain for Kelly’s Eye, whose title derived from the Eye of Zoltec, a fabulous jewel taken from an ancient statue in South America which makes Tim Kelly immune from harm.

López, who grew up in Buenos Aires, attended military school, then studied law at the Facultad de Derecho and began working at the Banco de la Nación. His passion, however, was for drawing, and he was persuaded by the artist José Luis Salinas that drawing could be a profession as well as a hobby. He made his debut in 1951, working for Editorial Columba’s El Tony. He also began drawing for Editorial Abril, where he met Héctor Oesterheld, a key figure in Argentinian comics.

In 1957 Oesterheld founded Editorial Frontera, where López joined an elite group of Argentinian and Italian artists. Over the next two years he drew El Eternauta, the story of a small group of survivors of an alien invasion who join a resistance group. By the late 1950s the comics market in Argentina was struggling and many artists found more lucrative work with British publishers, and López moved to Spain from where he produced a string of science-fiction tales for the UK, including The Drowned World, The Toys of Doom, and Galaxus, about a sympathetic ape-like alien creature on the run from the military.

In 1967 López returned to Buenos Aires where he set up a studio with, at its peak, seven assistants. To cope with the production of up to a hundred pages a month, he would sketch out the pages in rough, inking the faces of characters and then giving his assistant a detailed explanation of what the page required. Using this method, he was able to add Raven On the Wing (about a footballer), Gargan (another outsized alien), Adam Eterno, an alchemist’s apprentice cursed to travel time as an immortal, and Janus Stark, a Victorian escapologist.

Falling sales led to the closure of many of López's regular British markets in 1974, and he began drawing for Argentinian comics again. With Oesterheld he created El Eternauta Part II, set in the military dictatorship of a future Argentina. The strip was critical of the Argentinian leader Jorge Videla, who seized power in a coup d’etat in 1976. Oesterheld was abducted and held at a detention centre, where he is presumed to have died in 1977. López moved to Madrid where he began illustrating his son Gabriel’s semi-autobiographical writings.