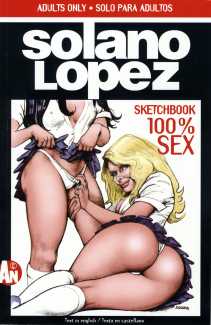 Sketchbook: 100% Sex is a slightly pretentious title, apparently the only book ever published by Buenos Aires-based publisher Ancares Editoria. It brings together a black-and-white selection from Solano López’s sketchbooks, featuring some of the largest and most unlikely male members to be seen anywhere, often inside moaning stereotyped young woman. There are also lesbian encounters (one of López’s favourite fantasies) and a scattering of aliens.

Thus somewhere between 50% sex and 110% sex depending on your proclivities.