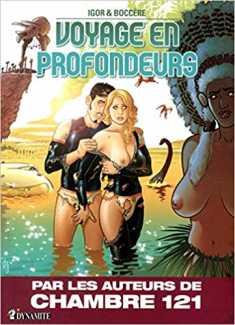 The back-cover blurb from the 2012 collected Dynamite edition explains the narrative succinctly: ‘The charming professor Linda Lidenbrock engages with the bowels of our planet in the company of Vincent Ledanoy, an experienced expert of deep orifices. A tribute to tales of adventure and travel from the end of the nineteenth century, Journey to the Depths is also a nod to burlesque cinema and Anglo-Saxon humour, but with the difference that the protagonists fornicate on each page – in the capsule taking them to the centre of the earth, on the beaches of a lost continent, on the island of Lilliput – even in the world of the Amazons.’

Though the cover states ‘By the authors of Chambre 121’, Igor and Boccère are of course one and the same.