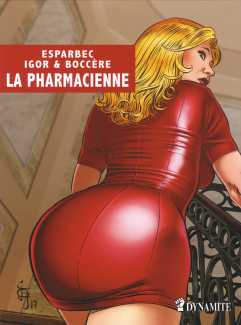 The back-cover blurb gives us the basic facts of the storyline: ‘Pharmacist by profession and submissive at heart, Laura Desjardins takes off her coat as soon as Beau P, her new companion, orders her to. Our heroine is far from suspecting that sexual appetite is hereditary: a seemingly naive young woman, her daughter already knows a lot about men! When Beau P surprises the cheeky girl between the legs of a comrade and decides to blackmail her, everything changes in their provincial town. And the arrival of Ernest, a cousin and penitent thug, only accelerates the debauchery of this seemingly normal family.’

The comic publisher Dynamite published this illustrated edition of La pharmacienne, which was drawn by Boccère and coloured by Andrea Camic. We show here just the beginning of the 62-page story.