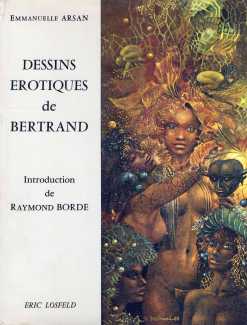 The first of the two Bertrand portfolios produced by Eric Losfeld contains six paintings and 102 drawings, some of which are reproduced in sepia. This collection of his work allows us to experience his psychedelic fantasies in their full range and context. This was the time of Timothy Leary, LSD, the Oz trial, and the musical Hair, when Bertrand-style imagery was the must-have artistic outpouring of hippydom and the alternative dropout lifestyle. There was little of the later analysis of gender and race stereotypes, so it seemed perfectly acceptable to sexualise young women with frizzy Afro hairstyles.

Dessins erotiques de Bertrand includes a tribute to Bertrand by the film director Raymond Borde, and an over-the-top introduction by Emanuelle Arsan, at the time as well-known an alternative character on the artistic scene as Bertrand. Arsan (1932–2005) was the nom de plume of Marayat Rollet-Andriane, formerly Marayat Krasaesin or Bibidh, a French novelist of Thai origin, best known for the novel featuring the fictional character Emmanuelle, a woman who sets out on a voyage of sexual self-discovery.

In the long, florid introduction, Arsan writes poetically of the many lesbian encounters imagined by Bertrand: ‘But what exactly have they come to teach us? It will surely help us to discover what it is if we attentively contemplate their breasts, more supple and resilient than any earthly flesh, their symmetrical nipples starred by infinitesimal cross-hatches and surrounded, without a single break in their botanical eyelashes, by little involucres suggestive of sensual pleasure that are better ordered and more precise than those our imperfect species is capable of.’

Dessins erotiques de Bertrand was published in a limited numbered edition of 5,000 copies.