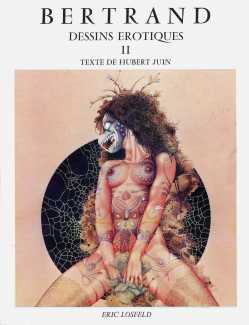 The first Losfeld portfolio of Bertrand drawings was so successful that a second volume, Dessins erotiques II, followed two years later, containing twelve full-colour paintings and 117 new drawings. The series of drawings which appears after the colour plates are more explicit than the artist’s previous published output, and include several which depict, or at least suggest, the involvement of male appendages as well as Bertrand’s ever-present female breasts and buttocks.

The ostentatious introduction to this second collection is by the Francophone Belgian poet, novelist, essayist and literary critic Hubert Loescher, writing under the pseudonym he often used of Hubert Juin. Its overblown style matches the artwork perfectly: ‘In the hamlet of sex we participate in peasant nuptuals, and fairs with many a young virgin. The evening brings slow caresses to the festivities. The cosy volliage nestles in the hips of a young woman who stretches languidly between us and the sea. Her hair is the distant forest, and the hills her breasts behind which the sun sets. Now sleeping, her back has the texture of the forest, and red berries bejewel her mouth and lips.’

Dessins erotiques II was published in a numbered limited edition of 1,500 copies.