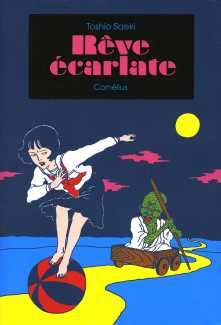 In 2016 the French publisher Cornélius embarked on a monumental five-volume project to issue all the known Saeki works from 1970 onwards, as published originally in SM Selecto magazine and reproduced wherever possible from the artist’s own originals. It has taken Cornélius six years to publish the first two volumes, and already the first, Rêve écarlate (Scarlet Dream), is out of print. We have reproduced here around half of the images in this collection, which were originally made by Saeki between November 1970 and July 1972.

In the (rather poorly-translated) introduction to Rêve écarlate, the artist and film-maker Jean-Louis Gauthey writes, ‘This dreamlike and fantasmatic universe defies censorship, multiplying graphic tricks to avoid direct sexual portrayal, which only makes it more refined. There is something frightening about the evocation power of Saeki – too frightening for conservative spirits, something even more aggressive than an openly pornographic image. Our societies seem to be facing more and more issues with obscure unconscious forces, locking themselves in denial and incapable of seeing art’s true values. Toshio Saeki makes the radical choice of not encouraging these ludicrous fears, meticulously exploring the most indescent [sic] portions of his imaginary world. You will find in this book the quintessence of an irreducibly powerful style, the ardent beauty of which continues to radiate.’