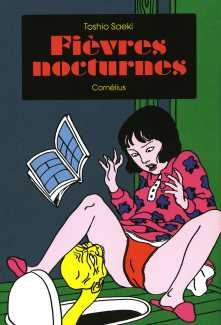 In the second of the Cornélius collections of Saeki works originally published in SM Selecto, we have – remarkably – the only Toshio Saeki book currently in print and available outside Japan. Fièvres nocturnes (Night Fevers) covers the period from August 1972 to March 1974, and includes many well-known images, including colour seriograph versions of drawings that had first been published in black and white in Saeki Toshio Gashû.

As with Rêve écarlate, Fièvres nocturnes has an introduction by Jean-Louis Gauthey, including the revelation by Saeki that one of his early artistic inspirations was the publication in 1969 of Tomi Ungerer’s Fornicon. You can see the Fornicon images here. We have again included around half of the images in Rêve écarlate, for the full Saeki experience we encourage you to buy the book, and hope that it will not be another six years before the third volume appears.

Rêve écarlate can be purchased from the Cornélius Boutique website, which you will find here.