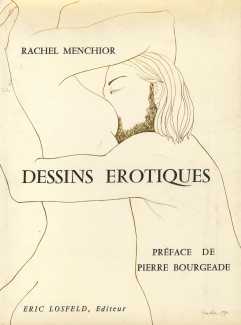 Rachel Menchior still remembers the reception of her drawings well: ‘In the early 1970s I discovered that my book had been banned, and 186 copies had been seized by the French state as obscene literature. I had to go to correctional court in Paris, defended by the late Jean Mottard. I was acquitted, but the public prosecutor having appealed, I was condemned for my contempt of good morals. Because I am a woman, of course! By then most of the printing seemed to have disappeared into thin air, though I sometimes find traces of it in Brazil or somewhere. Now it has become a collector’s item.’

The collection includes a short introduction by the Belgian playwright and poet Pierre Bourgeade (1927–2009), which interprets the theme in a sinister light surely not imagined by the artist, and tells us more about the writer than about the art: ‘The discomfort one experiences in front of Menchior’s drawings is similar to the pleasures one finds in dreams. These drawings are crimes. Living is just a fantasy. Love is only true when experienced beyond love. What spirit animates Menchior when she draws? Hatred I’m sure. Her work is an outrage. It’s a glow-in-the-dark knife. The sexes are sewn together. Imagination soars. The hand of madness does not deviate. Furious lovers give free rein to their revenge.’

Dessins érotiques was published in a limited numbered edition of 3,000 copies.