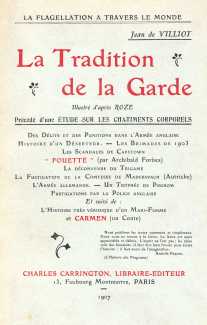 La tradition de la garde, précédé d’une étude sur les chatiments corporels (Traditions of Protectors, Preceded by a Study of Corporal Punishment) is one of many volumes produced by the premier pornographer of the 1900s, Charles Carrington, who produced huge numbers of expensive books, ranging from reprints of classic ‘Galantes’ to pseudo-scientific sex books like this one, and even the works of Oscar Wilde. Most of Carrington’s titles were lavish productions on expensive paper in limited editions, such as this anthology of flagellation-related pieces.

Included in the collection are ‘The Delights of Punishment in the British Army’ (flagellation was for many years considered ‘an English perversion’), ‘The Thrashing of Madame de Maderspach’, and ‘The True Story of a Married Woman’. The overall editor is given as Jean de Villiot, a pseudonym of the prolific Georges Grassal de Choffat.

The Roze illustrations are a very mixed bunch, mostly borrowed from previously-published sources – hence ‘Illustrations after Roze’ rather than ‘by Roze’.