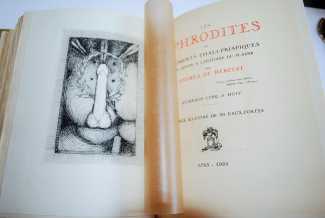 1925 was a busy year for Frans de Geetere as a book illustrator; at the same time as he was working on the engravings for La toison d’or he was also commissioned by Le libraire Denis to produce plates for an edition of the French eighteenth-century novelist André-Robert Andréa de Nerciat’s erotic memoir Les Aphrodites, ou fragments thali-priapiques pour servir à l’histoire du plaisir. Nerciat was the son of a Burgundian royal official, who retired from the military in 1775 to concentrate on writing plays, verse, light music and pornographic novels. He worked as a secret agent of the French government across Europe, and may also have worked as a double agent, as he was arrested by the French when they invaded Naples in 1798. His Aphrodites was first published in 1793.

Les Aphrodites was published in a limited numbered edition of 332 copies.