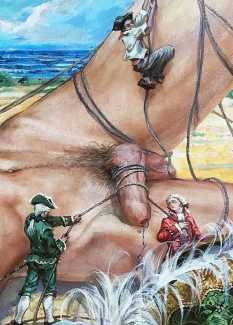 Between 2012 and 2015 Kirill Fadeyev created a series of large paintings based on Jonathan Swift’s epic story of Gulliver, concentrating on Gulliver’s time with the diminutive Lilliputians. They are some of his most detailed canvases, and well repay a study of the meticulous detail as well as the overall effect. We have also included a related 2013 painting, ‘Oh My Master’.